The history of the diaries my father kept during the war is inseparable from their eventual publication, and marked by what I can only describe as serendipity. From the time I was born ~ less than a decade after the war's end ~ until my father moved to what would be his last residence in 1994, the scrapbooks containing his journals, mementoes and photos stayed locked in a Steelcase cabinet beside the desk in his home office for almost 46 years. Rarely did he show me their contents, preferring -- like most of his generation -- to keep those memories to himself. When he died in 1998, they remained undisturbed and untouched, to the best of my knowledge, in that house until my mother moved in 2000 to what would be her final home for the remainder of her life.

In 2011, they resurfaced during the upheaval 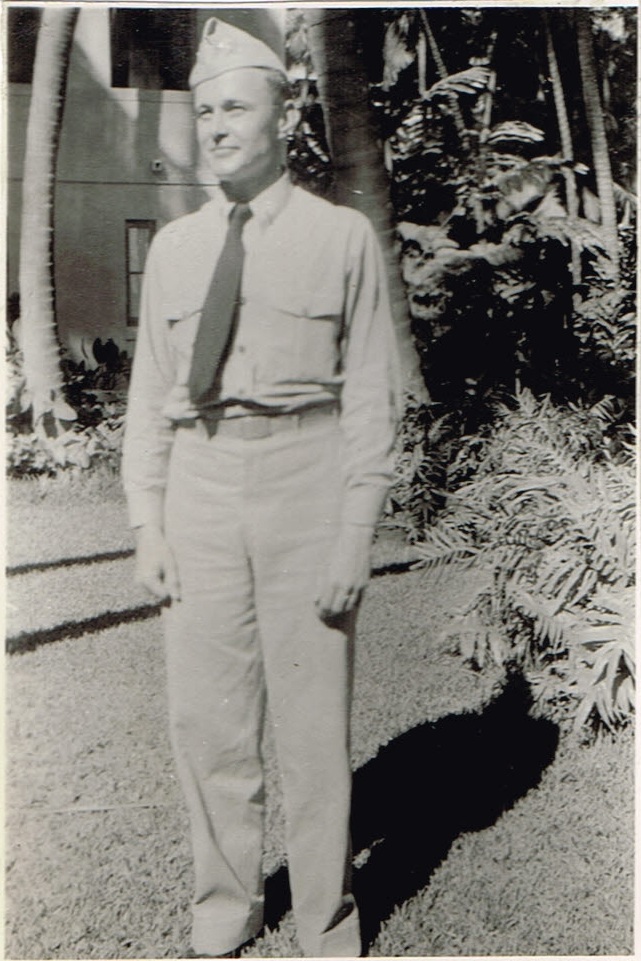 of sorting through and disposing of my parents' combined estates, when my sharp-eyed wife noticed them in a carton marked as dumpster-bound trash, from which she presciently rescued them. At that point they came into my possession, were stored and mostly forgotten until 2019, after I had returned from a first-time vacation to Hawaii. Spurred by nostalgia, I finally cracked the brittle cover and deftly turned the decaying pages to reacquaint myself with my father's hidden history as a veteran of nine sea battles in the southwest Pacific 1942 until 1944, when the "Blue Goose" was torpedoed at the Battle of Leyte Gulf on Oct. 20. Three 80-year-old photos (one of them reproduced at right) triggered an epiphany that convinced me it was destiny that these artifacts should have somehow survived until that moment. It was then I resolved to do all in my power to ensure his war experiences had a shot at a greater permanency and audience than they had known to that point in time.

The letters had a less fortuitous journey. I had xerox copies of dozens he wrote home during the war to immediate family, that I had squirreled away in banker boxes for years as well. Encouraged by reaction to the journals, I delved into the letters only to realize they covered another facet of war every bit as vital as my father's maritime service: the civilian homefront. Their publication followed just months after the diaries.

I feel there's no greater honor I could pay him ~ absent the regret of having only achieved this posthumously ~ than to make them available to others.

Thank you for visiting Pineapple Maru.